If one image sums up British politics in the last five years it is this image. Fish in hand, Mr Johnson has convinced his adoring crowd he is the only man who can unite the country, by which he means unite the Conservatives, bring back the kippers who escaped to UKIP (now in Farage’s Brexit fan club) to the fold of the broad church that was the Tory party, now struggling for its life. There’s nothing like an in joke to bring people together. There’s nothing like a good laugh to make people forget about negativity, about the reality of the last three years of attack on British democracy, in the name of democracy. “Bring back the Kippers” Mr Johnson brandishes a brown fish in a transparent plastic bag, in reality a red herring. It could be a warning if you choose to interpret colours politically via fishy stories, but like so many words out his mind since his days as a journalist in Brussels where he admittedly twisted the truth for the sake of a good story, the man who started the fun fishy stories from Brussels to boost newspapers sales has climbed all the way to the top of the British political tree thanks to fun and games up to his last hustings to become le grand fromage britannique (anglais, really).

It does not matter how Mr Johnson gets to power, just like it did not matter how Mr Trump got to power or it did not matter how Mr Farage got to be the biggest single party in the EU. It does not matter to true believers that Mr Farage, nor Mr Tice, nor Mrs Widdecombe nor Conservative Mr Hannan for that matter, none of the big Brexit hitters bothered to turn up and vote on refugees yesterday (18th July 2019). That’s not newsworthy to them. Democratically elected to be Members of Parliament, these anti-EU politicians claim to represent us, they get paid more than most of us can dream of so they can keep telling us how undemocratic the EU is. Politics hey? 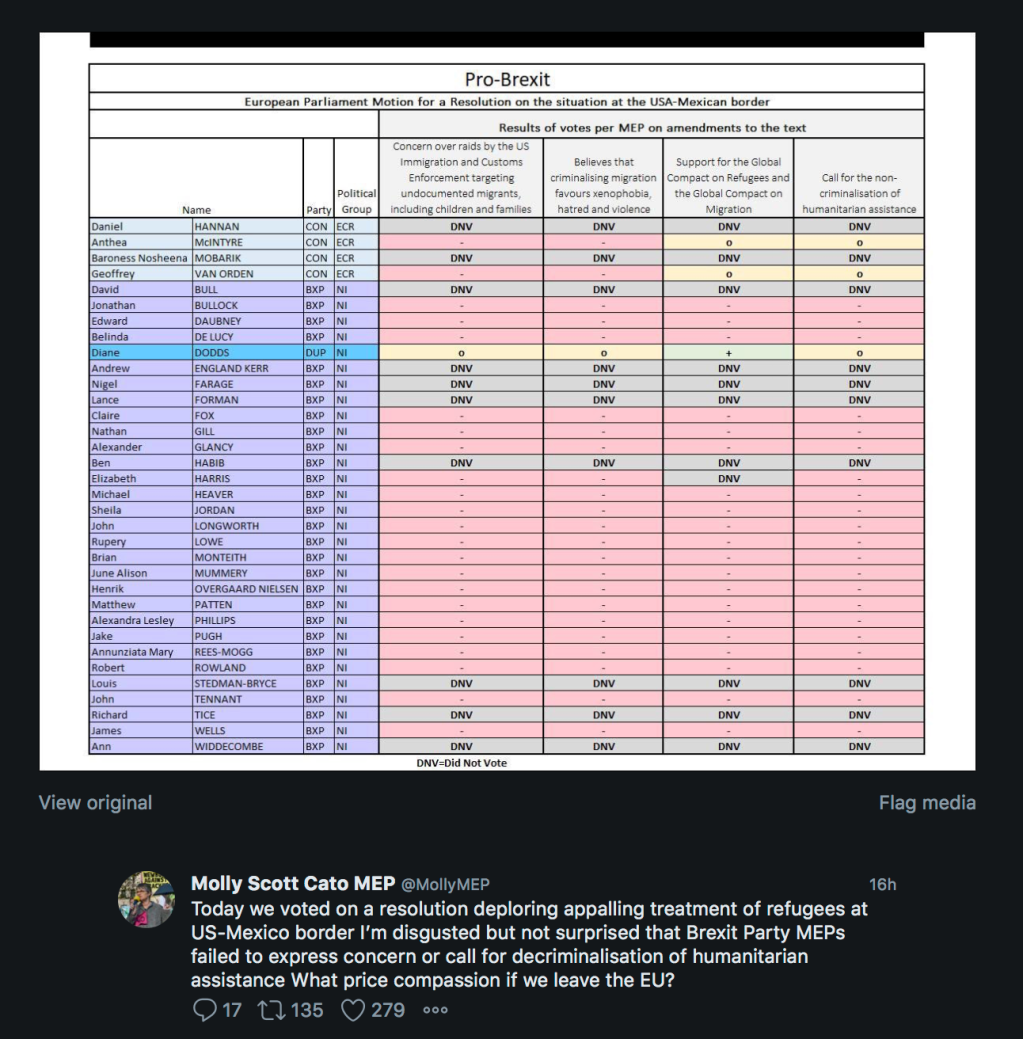 *DNV Did Not Vote, ie were not there. Yellow: abstained.

So long as Mr Corbyn -the devil in conservatives’ eyes- does not get to Number 10 Mr Johnson and Mr Farage will say what it takes. Their teams will say what they know English kippers want to hear because since 2015 only kippers matter. Politicians and pundits keep telling us this, it’s not like they are hiding the fact that if ‘we don’t deliver Brexit’ the heartlands will never vote Conservative ever again. Just like Conservatives now say we were warned of the dangers of a vote Leave, bringing back the much maligned Project Fear when it suits as proof, let it not be said Mr Johnson did not warn us that this whole mind boggling real life drama we are in the middle of was to bring back the kippers to the Conservatives come what may to keep Labour out of Number 10.

“Do or die” said Mr Johnson. Indeed. This is a matter of life and death for the Conservatives. Anybody who dares question or have another opinion is an enemy of the people, from judiciary to civil servants, to the people who are traitors if they stand in the way of a newly defined democracy. This is the path chosen. Bash anybody standing in the way of a pure ideology of independence, anchored on the strength of Euroscepticism stoked by years of British journalism and English exceptionalism à la Johnson. For the majority of British voters, who do not follow the political news daily, those who love him will still think he is a genius, which within today’s rules of communication he mostly is, and those who hate him will have yet another proof of his twisted mind. A picture paints a thousand words. Where freedom fighters raise a fist in protest, Mr Johnson raises a hand clinging on to a kipper shrinked wrapped in transparent plastic from a British dominion (that happens to be a tax heaven) that is not part of the EU.

Who said transparency was dead?

Oh and the actual story of the British actual kippers (smoked fish) that must have an ice pillow to travel to the EU? It’s a British rule. Only fresh fish is within EU rules and Lord knows fishing is central to the UK hating the EU. Processed fish has nothing to do with the EU, the Isle of Man is not even part of the EU but that’s all boring useless Remain details of no interest to the Leave believers.

With all this in mind, it seems clear to me the EU is a side show. None of the last 3 years has to do with the EU for the Conservatives, look at Trump, same path of getting rid of the rules as we know them, however much some Leave voters hate the fact that this is so, whilst many more do admit they do love Trump. The EU is a scapegoat, getting to power by saying what the people feel they want is what matters, never mind if the detail of health or police is not delivered, it will appear to be delivered as in the US where ‘Trump has delivered’.

That’s politics for you, it’s not like we’re not used to politicians making promises they don’t deliver. People who hated politicians because they’re all scum now tell us they believe in those politicians. They voted for something they now want to see delivered. For once. And it can be done. Apparently. Just get on with it, say the politicians, parroting the will of the people. The only people who matter. It does not matter what it is they voted for, clearly, since they voted for a Deal, as clearly stated in the Conservative manifesto, that contract between the people and the servants of the nation we keep being referred to in the name of democracy. So long as Brexit is delivered. Details? Hey, like experts, who needs them when you can crack a good joke to get people on your side? People have had enough of negativity, don’t you know? So long as we keep faith in the Conservative and Unionist Party to keep the United Kingdom of Great Britain and Northern Ireland a united kingdom, positivity will see us through, to nobody knows what but never mind the details, or the experts’ warnings.

We are British (well, you are, I just happen to live here). We will not let others tell us what to do (except maybe Mr Trump but he is our bestest friend so that’s OK).

It’ll all work out for the best. Keep faith and hope. Costs to the British union? Never mind when the alternative is the death of the party. Cost to people’s livelihoods or even lives in the case of some medicines? Well, that’s the price to pay to stay in power, collateral damage as they call it in war, because the alternative is communism, progressives, a Green New Deal, Extinction Rebellion, all these rising alternatives that threaten the world as we know it. Meanwhile, an absolute majority, from conservative voters to labour voters (Labour is another story altogether but an equal mess), despair at the red herrings thrown in our faces in the name of democracy.

Since we know about the iceberg -as even Mr Johnson admits he does not want No Deal but we have to threaten ‘them’ to negotiate, as if the rest of the world (and especially those who negotiate with the UK) are not watching the British news, are those who are trying to avoid the head on collision really the traitors of the United Kingdom?

2 thoughts on “Bring back the kippers ”